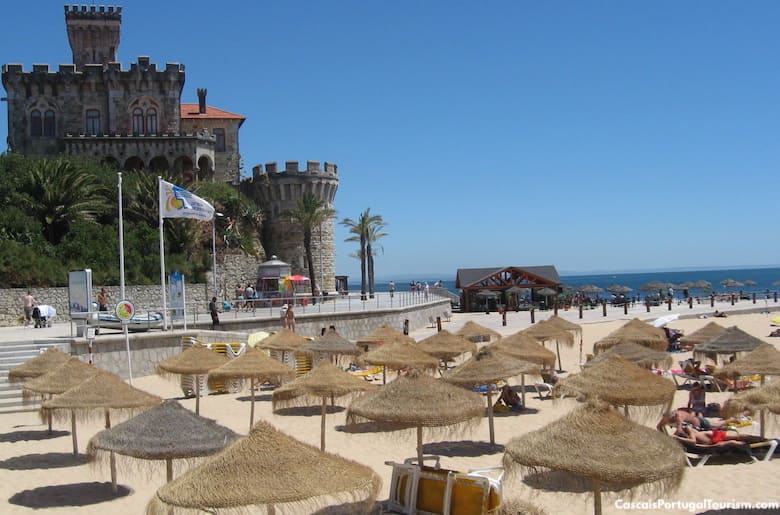 Once promoted as Costa do Sol (“Coast of the Sun”), the suburb of Estoril is part of Cascais, and together they make up the “Portuguese Riviera.” Just over 20 kilometers (12 miles) from Lisbon, it’s where the rich, famous, and even royal Europeans and spies escaped to during WWII, when Portugal remained a safe, neutral country. Grand hotels and Europe's biggest casino were built to welcome them, and that's where author Ian Fleming got the idea for the James Bond character. Although the special agent's birthplace is no longer as glamorous and glitzy, it remains a cosmopolitan town, with palm-lined streets, aristocratic mansions, world-class golf, and beaches attracting locals and tourists throughout the year. 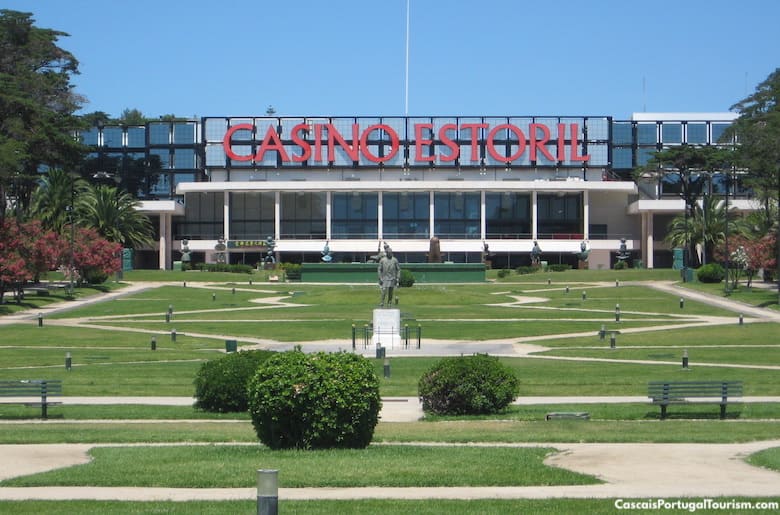 
Down the promenade that connects Estoril to Cascais is a number of beach bars and restaurants, so even when it’s too cold to get your feet in the sand, it’s a pleasant day trip from Lisbon for a few hours by the sea. This is a craggy coast with fine sand and calmer waters, making it an attractive destination for people of all ages, including children.
There are half a dozen beaches in town, all connected or within walking distance from each other. For complete details, see the Estoril beaches guide.

Estoril's train station is right behind the beach of Tamariz

How to get to Estoril from Lisbon, Cascais and Sintra


Estoril lies on the Cascais train line which departs from Lisbon's Cais do Sodré station every 20 minutes. The journey time is 36 minutes throughout the day and 28 minutes at rush hours, and the station is right by the beach and the casino. It's also possible to walk from/to Cascais, following the continuous beachfront promenade for about 15-20 minutes.
Those visiting from Sintra, or based in Estoril and wanting to visit Sintra, may take bus 418. It departs once per hour, and takes approximately 30 minutes to go between the two towns. Tickets are purchased from the driver.
The terminal in Estoril is in front of the train station, and in Sintra it’s outside the Portela de Sintra station. For Cabo da Roca (the famous westernmost point in Europe), head to Cascais (a 20-minute walk along the promenade) and take bus 403 from there.


How to Get to Estoril from Lisbon Airport


If you’re staying by the beach in Estoril, you can book a transfer or take a taxi from the airport. A transfer will be slightly cheaper than the taxi, which can be quite expensive -- anywhere between 50 and 70 euros for the 30-to-40-minute ride. Using public transportation requires metro and train journeys, or the AeroBus and train. There’s a metro station at the airport, which is on the red line, which connects to the green line at Alameda, which ends at Cais do Sodré. That’s where you can catch the Lisbon-Cascais train to Estoril, as described above. The AeroBus (the special airport bus) also terminates in Cais do Sodré, and although it’s more expensive than the metro, it goes there directly, with no inconvenient connections in between. The entire metro(or AeroBus)+train journey can take anywhere between 60 and 90 minutes, depending on connections.
Alternatively, take a taxi to Cais do Sodré (it should cost around €10 to €15), and then the train.
You may ride the metro and train for free with the Lisboa Card, but not the AeroBus.


Where to Stay in Estoril 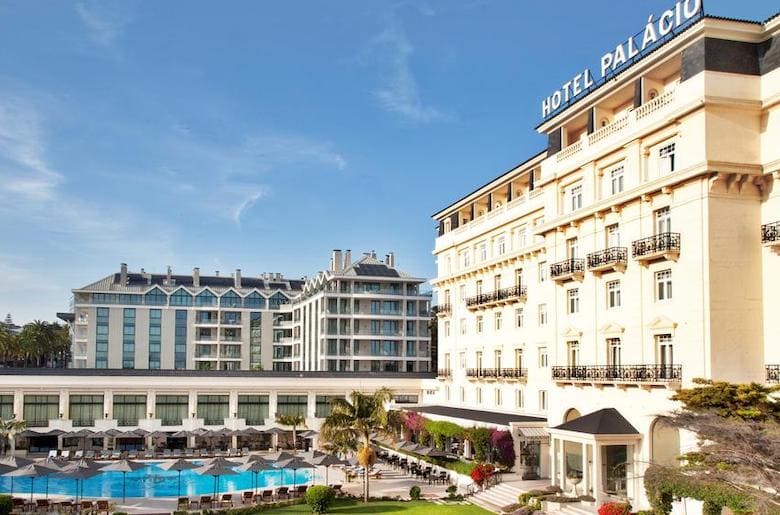 Built in 1930, this palace hotel is one of Portugal’s most legendary. It was the glamorous home of monarchs and celebrities during World War II, as they escaped to the neutral and sunny “Portuguese Riviera.” The current décor of the 161 rooms recalls the elegance of those times, but the interior also has the modern facilities and services expected by today’s travelers, like a spa and fitness center. Outside are lush gardens with a large swimming pool. 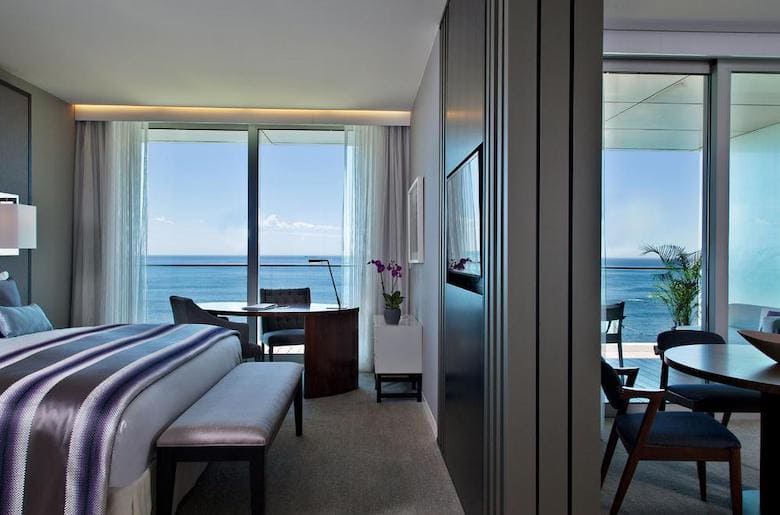 This large 5-star hotel of the well-known Intercontinental chain, stands right on the border between Cascais and Estoril. It has indoor and outdoor pools, a fitness center, and a sophisticated restaurant. All of the rooms have balconies and overlook the ocean. 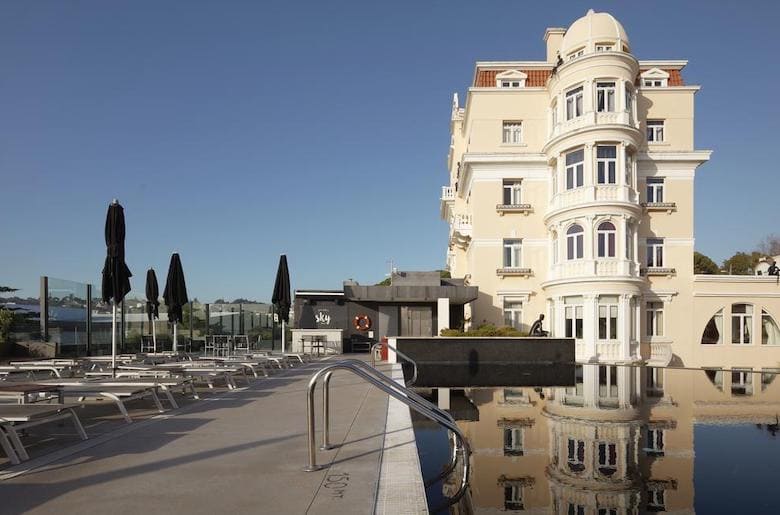 A total of 69 rooms and suites occupy an elegant Belle Epoque building in the center of Estoril. They’re decorated in different colors and styles, blending the classic and the contemporary. It has an outdoor pool, but the beach of Tamariz is just a short walk away. 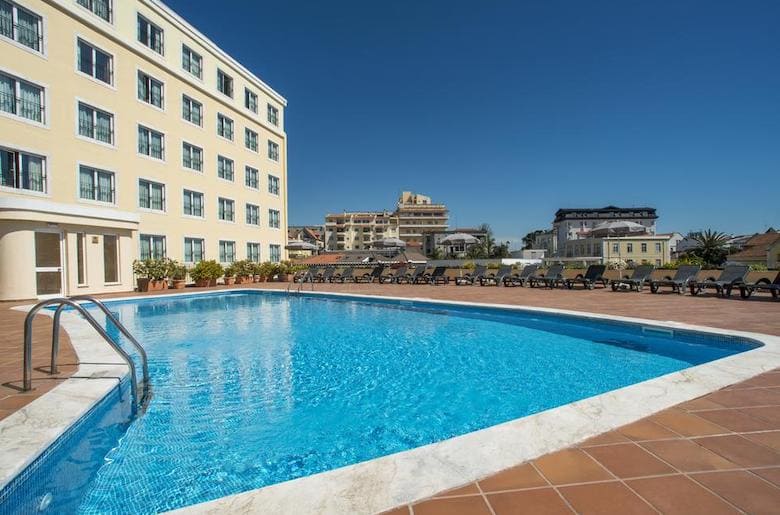 Located across the road from Tamariz beach, this 4-star hotel features a terrace with a swimming pool with sea views. More views can be enjoyed from some of the rooms, while the rest of the interior includes a restaurant, a spa and fitness center.