How to go from the airport to Cascais by taxi, metro, bus, and train from Lisbon 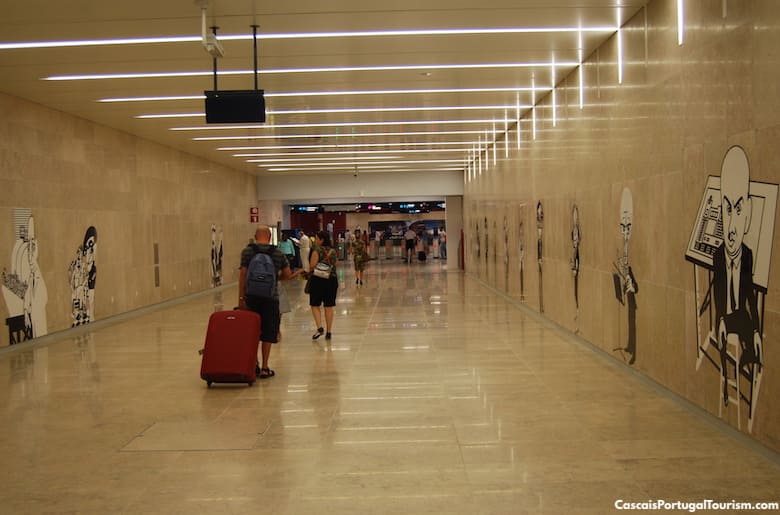 The metro station of Lisbon Airport

If you choose Cascais as your holiday destination, you’ll likely be arriving on a flight landing in Lisbon. The international airport is 36km (22 miles) from Cascais, and there are different ways to travel between the two (detailed below):
- Taxi or Ridesharing (such as Uber)
- Pre-booked private transfer
- Public transportation (metro+train or bus+train)

Taxis from Lisbon Airport to Cascais or Estoril


The fastest way to reach your hotel in Cascais or Estoril is by taxi. It’s also the most expensive option -- about 80 euros or more if you take one from outside the arrivals terminal. It should be slightly less if you use a ridesharing service such as Uber. Note, however, that ridesharing vehicles can’t stop outside the arrivals terminal, so there may be some confusion figuring out an exact pickup location. Alternatively, and more conveniently, book a transfer, which may save you a few euros.
By road, Cascais can be reached in 40 minutes to one hour from the airport.


How to go from Lisbon airport to Cascais on public transportation 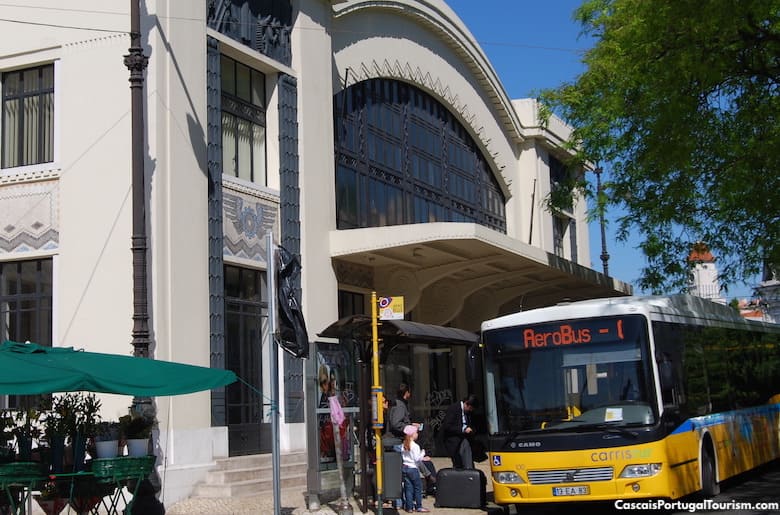 The airport bus outside Cais do Sodré Station

By public transportation, you may take the metro and then the train. The airport is on the red line of the metro, so you then have to connect to the green line at the Alameda station, to Cais do Sodré.
Cais do Sodré is the final stop of the green line, and is also where you connect to the train to Cascais (which also stops in Estoril). It departs every 12 minutes at peak times in the early morning and late afternoon, and every 20 minutes at other times throughout the day.
The metro journey from the airport to Cais do Sodré is less than 30 minutes, and the train from Cais do Sodré to Cascais takes 40 minutes (36 to Estoril).

NOTICE: THE AEROBUS IS CURRENTLY OUT OF SERVICE
Alternatively, take the AeroBus (a special airport bus service) to Cais do Sodré. It may be a better options than the metro if you’re traveling with a lot of heavy luggage, as it doesn’t require a connection. It departs from outside the arrivals terminal every 20 minutes, between 8:10am and 9:10pm, and terminates outside the Cais do Sodré train station (in about 30 minutes).

With good connections, you can be in Cascais in less than 90 minutes.
Yet another option is taking a taxi from the airport to Cais do Sodré and then the train. The taxi fare should be between 10 and 15 euros, depending on traffic and time of day (it’s more expensive at night).


How much is public transportation from Lisbon airport to Cascais?


If you buy the Lisboa Card, transportation is completely free -- both the metro and the train (but not the AeroBus). If you take the metro and train without the Lisboa Card, it’s a total of €4.30 per person (€2.00+€2.30), and if you take the AeroBus and the train, it’s €6.30 (€4.00+€2.30).
A single metro ticket is €1.50 but your initial purchase requires a reusable magnetic card which costs an additional €0.50. Each traveler requires their own individual card.
Once in Cascais, most hotels are within walking distance of the train station. If yours isn’t, there’s a taxi rank right outside.