Home > What to See and Do > Promenade 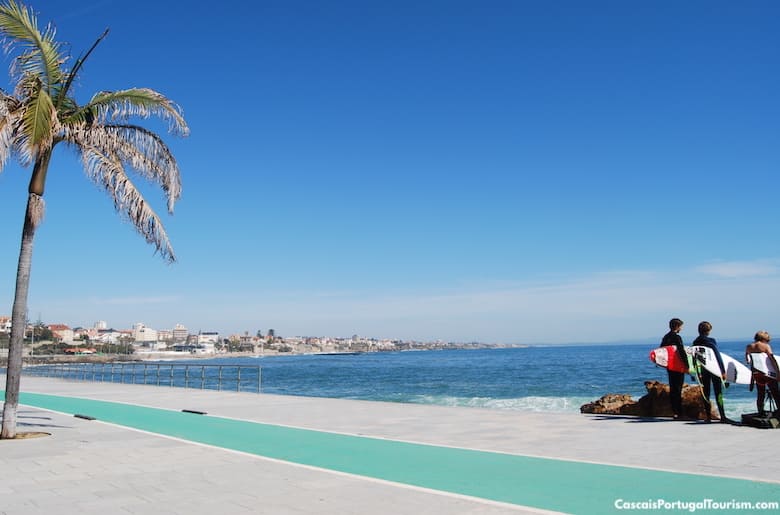 The promenade between Cascais and Estoril

A continuous beachfront promenade connects Cascais to Estoril. It’s an enjoyable 25-minute walk, following the sea walls for 3 kilometers (close to two miles), starting in Praia da Conceição in Cascais to the west, and ending in Praia da Azarujinha in Estoril to the east.

The promenade is wide and flat, so it’s suitable for people of all ages and abilities. Tourists walk, locals jog, teens skate, and younger kids cycle, past beachfront cafés, bars, restaurants, and a number of grand 19th-century mansions and modern hotels. In between are also pull-up bars and other workout equipment, as well as a seawater swimming pool that delights children and teens.

Walking from one end to the other, you pass by some of the most popular beaches in the Lisbon region, and it’s a recommended activity to anyone visiting Cascais and Estoril. When arriving from Lisbon, get off the train at the last stop in Cascais, and walk to Praia da Conceição, which is just a few feet from there. To return to Lisbon, board the train at the Estoril station. Before that, you might want to extend your walk to the gardens of the Estoril casino, across the road from the station, and may even want to try your luck inside.
Following the coastline from west to east, these are the beaches along the Cascais-Estoril promenade: 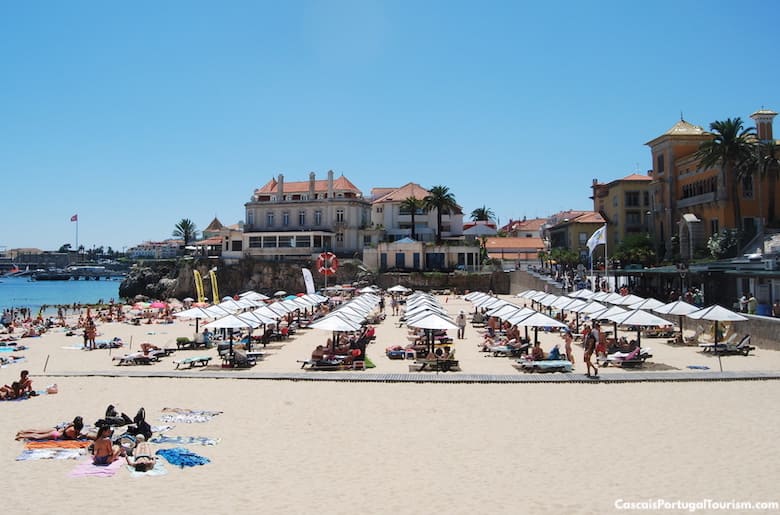 It’s the most crowded beach on the promenade, due to its location by the Cascais train station and the center of town. It’s quite beautiful, faced by mansions and with calm, clear waters. 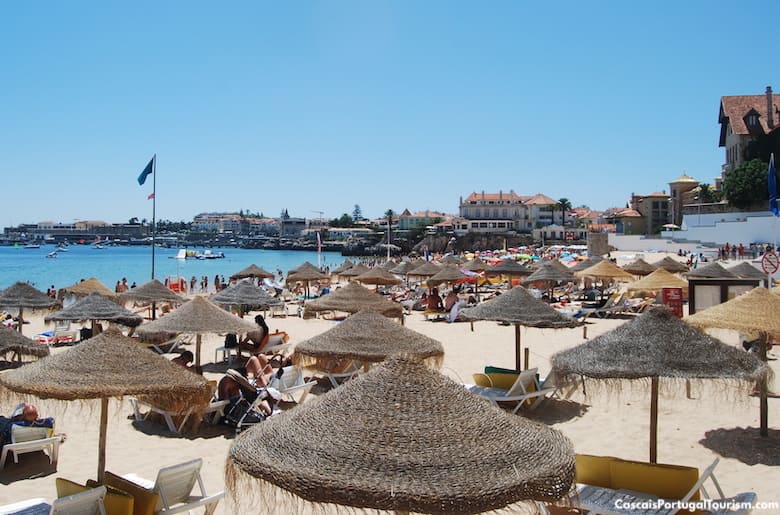 This beach starts below the mansions seen above the eastern end of Praia da Conceição. Its name (“Beach of the Duchess”) honors a duchess who lived in one of those mansions. Its bars rent sunbeds, parasols and stand-up paddleboarding equipment. 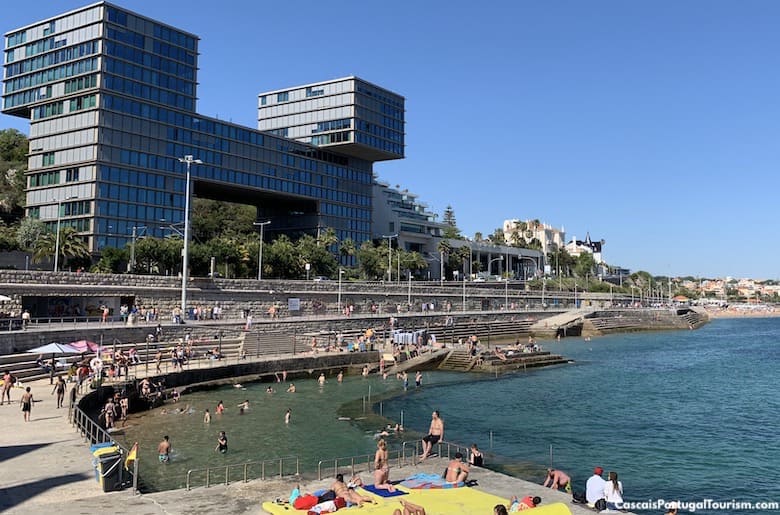 It’s the most family-friendly beach on the promenade, due to is seawater swimming pool. This is where Cascais ends and Estoril begins, and is the beach of the residents and guests of the huge glass apartment building, mansions and hotel behind it. This is also where you find workout equipment, usually used by the fittest young locals. 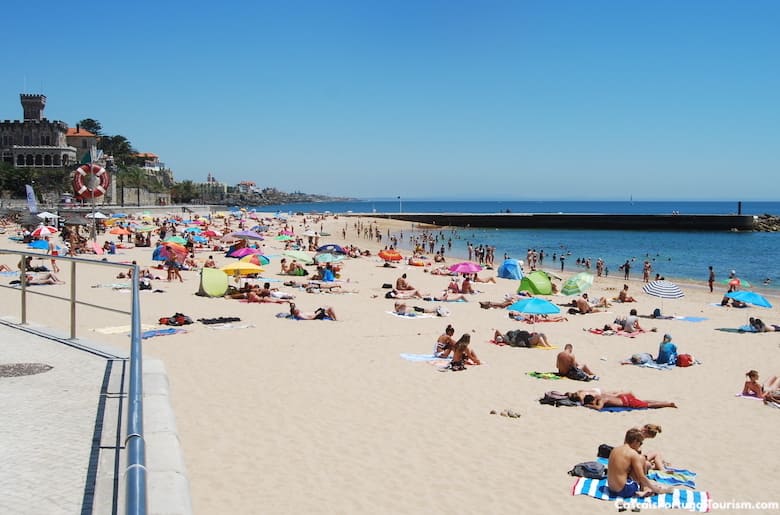 It’s the region’s postcard beach, for the castle that stands above it. It’s mostly frequented by tourists and teens from the suburbs, who arrive by train at the Estoril station behind it. It has a number of bars, open until late at night.

See the Praia do Tamariz Guide 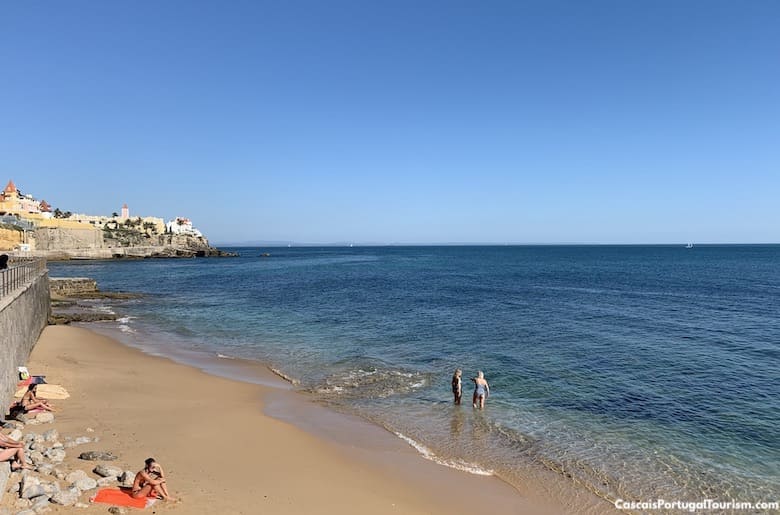 Very few tourists come this far down the promenade, so it’s mostly local families that you see at this beach and its restaurant overlooked by a 17th-century fort. Its shoreline is a little rocky, but low tide creates tidal pools, much enjoyed by the younger crowds. 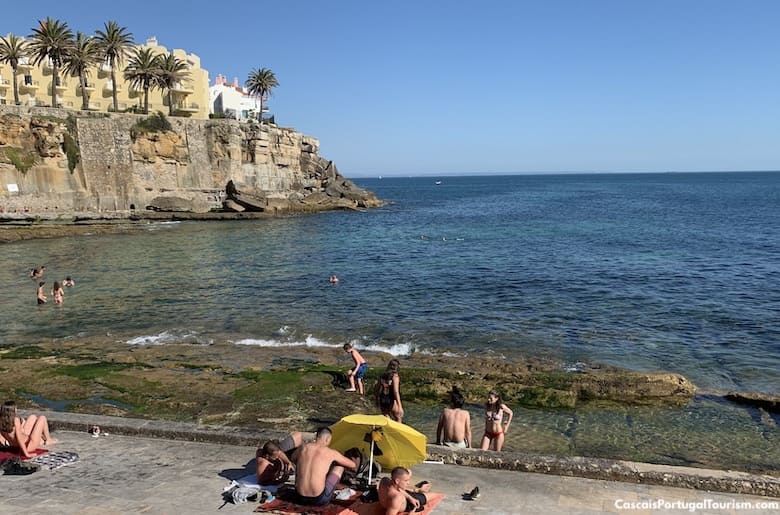 Protected from the wind by a cliff, this picturesque beach is overlooked by mansions, condos and palm trees. It’s popular with the local youth, who often take over the sandy area, sunbathing or playing sports.